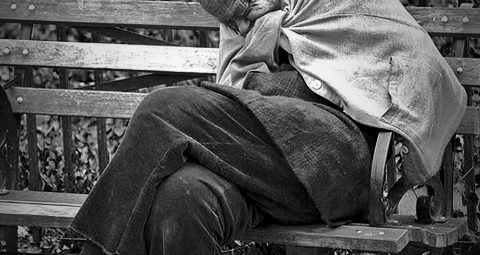 We thought you should know these seven facts about homelessness.

7. You could fill five football stadiums with the homeless population of the U.S.

At least 567,715 people were homeless on a given night in January of 2019 in the U.S., according to the Department of Housing and Urban Development’s (HUD) annual Point-in-Time (PIT) 2019 count.

While the PIT count does not fully capture the state of homelessness in the country, it offers an important snapshot that helps direct resources.

One in every 30 children experiences homelessness every year in the U.S. Children are homeless in every city and state nationwide.

5. 40% of homeless school-age children have a mental health problem.

Experiencing homelessness as a child may lead to changes in brain architecture, one report notes. These changes can hinder learning, the handling of emotions, the forging of relationships, and more.

4. More than half of homeless veterans have a mental and/or physical disability.

There are nearly 37,085 homeless veterans in the country. Veterans are more likely than non-veterans to experience homelessness, especially if they have a low income, a mental health problem, or a history of substance abuse. Many also struggle with traumatic brain injuries (TBIs) or post-traumatic stress disorder (PTSD), both big risk factors for homelessness.

3. On a single night in 2019, homeless services providers had more than 48,000 beds set aside for survivors of domestic violence

Many people are homeless because they have left an abusive partner. Abusive people may control a house’s finances, and/or keep their partners from socializing. When the survivor decides to leave, he or she may find him or herself without a credit or employment history, money, a support network, or landlord references, increasing their risk of becoming homeless.

Homeless people have an average life expectancy of  50 years old. This short life expectancy is tragic but not necessarily surprising, given that people who are homeless are more likely to get sick, struggle with mental health and/or substance abuse, and are often victims of violence.

Every year on the longest night of the year, cities nationwide mourn the loss of people who died on the street in their communities.

Source: National Coalition for the Homeless

Photo: A list of people who died on the streets of Denver, CO December 2014 through December 2015

1. Anyone could be at risk of homelessness.

While hundreds of thousands struggle with homelessness, millions more are living paycheck to paycheck and at risk of becoming homeless. One unexpected event, like a car breaking down, can put them on the street.

The lack of affordable housing is an epidemic, but homelessness is preventable. Donate now to help support formerly homeless individuals in your community.